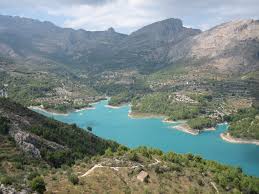 The reservoir of Guadalest is a reservoir near the town of El Castell de Guadalest in the Spanish province of Alicante. The reservoir has a capacity of 12.99 hm³ (12.99 million cubic meters) and a water surface of a maximum of 86 ha. It receives its water mainly from the river Guadalest, which flows downstream of the reservoir with the river Algar. The concrete dam is 94 meters high and 236 meters long with an overflow capacity of up to 400 m³ / s (cubic meters per second). The water is used for drinking water supply and agricultural purposes in and around Alfaz del Pi, Altea, Benidorm, Finestrat, Polop, La Nucîa and Villajoyosa.

The construction of the dam and the reservoir took place between 1953 and 1963. After a period of drought, the reservoir in 2016 was only about 15 percent full. Due to the large amount of precipitation in the winter of 2016/2017, this was fully restored and the situation arose that even water had to be let through because the maximum capacity had been reached. According to the rules of the Confederación Hidrografica del Jucar (CHJ), which is responsible for the management of the reservoirs, rivers and streams in this area, the reservoir in October of each year as a precaution for the expected rainfall period may not exceed 9 million cubic meters. meters, so that further passage may be necessary. Because of the drought periods, this ‘water waste’ evokes a lot of protest and the demand to expand the storage of water in the area.

Boat trips are organized on the reservoir with a solar-powered boat with a capacity of 80 people.